I had a great time at the Word Camp SF 2010. It has been a while since I have attended an event, especially since the baby was born, and James took care of Roger today while I attend Word Camp SF.

Word Camp SF 2010 is held at the Mission Bay Conference Center, which I have not been to before. The location was great, though parking was not cheap. I happily paid for the expensive parking, though, especially since I had to take pump breaks so it was worth the extra money for me to have shaded parking close by. The event was definitely worth the affordable $50 ticket price.

There were two main rooms, two tracks of talks, and I was not able to attend all of them. I kicked off my day with Scott Berkun’s talk WordPress 2020, about WordPress as a platform for Revolution.

Vanessa Fox’s talk about SEO followed, and I found that to be informative as well. I skipped part of the next session for pump break, but was able to hear Michael Erlewine (Mitcho) talk. I thought that his talk about abstracting code was very effective, even though it was targeted toward developers instead of someone like me. I attended User Experience the WordPress Way talk by Jane Wells, though it was very internally-focused and geared toward developers as well. It was cool to see that aspect of WordPress discussed nevertheless, since most of the time I only look at it on my computer by myself.

I also enjoyed Matt Mullenweg’s State of WordPress. I was very impressed by Matt and the talk got me excited about the upcoming WordPress 3.0 release. 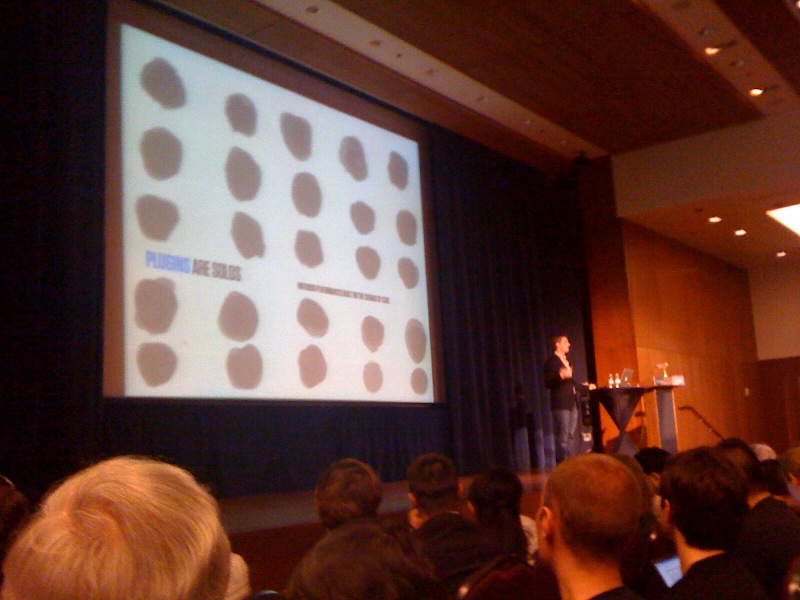 As I look around at the attendees, there were many Macs — Macbooks, iPhones, and iPads. I also saw a lot of expensive DSLR cameras. I tried to carry light, so I took the above pics with my iPhone, which does not have a good camera. I actually had a Canon Powershot in my bag but I was too lazy to take it out and focused on taking notes. 🙁 Live and learn.

Overall, I am completely impressed by this event — it was incredibly well put together. I will definitely be attending next year.