Why Do Women Love Mr. Darcy? 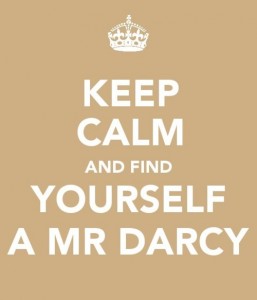 Recently I came upon this image while on Facebook. It was liked by over 21,000 people within a matter of a few days. It has been a while since I read Jane Austen’s Pride and Prejudice, but I remember thinking that Mr. Darcy was as annoying as her Emma! Like Emma, he is “handsome, clever, and rich,” but he is also arrogant and meddling as well. What is it about Mr. Darcy, that women like? Is it the handsome, clever, and rich part or is it something else?

If memory serves, I also recalled that there are also endearing characteristics, like that he is awkwardly honest. I am sure that most modern women would dump a guy who is so brutally honest he criticizes your attractiveness on first meeting, though. Mr. Darcy is like a lot of men (as he even describes himself as selfish and overbearing), until you consider that he is sensitive, a good listener, thrives on criticism, and changes for the woman he loves. This is where the fairy tale elements kick in — I know very few men (or women) who can sit there and take harsh criticisms without getting defensive, remain a gentleman, is deeply affected by the tongue lashing, good apologizing, and actually make changes based on said criticism. He does all this and yet likes Elizabeth Bennett just as she is. Very few men will have all those qualities and still be handsome, clever, and rich!

I do enjoy the witty banter, and I love a good sparring of wit. However, I wonder if Elizabeth Bennett and Fitzwilliam Darcy would have made it happily ever after as a modern married couple. If you want to have a good relationship, John Gottman, the foremost relationship expert and researcher warns one of the six predicting factors of divorce is “harsh startups,” or the use of criticism, sarcasm, or harsh words. In fact, he calls  Criticism, contempt, defensiveness, and stonewalling (withdrawal) the ” four horsemen” of marriage apocalypse. Of course, the number one predictor of divorce is habitual conflict avoidance, which is clearly not a problem for Mr. Darcy and his Elizabeth.