After hearing about other ladies with babies in strollers getting kicked out of Castro Valley High School track, I was then kicked off myself recently, so I wrote a letter to CVUSD asking for clarification:

RE: Al Palacio and Use of CVHS Track

I am writing you in reaction to an incident today in which I was not so kindly kicked off the CVHS track by a member of your staff Al Palacio.

My husband and I purchased a home in Castro Valley right before Christmas 2009 and moved in January 2010. My son was merely 4 months old then and while I walked around with my son in a stroller I noticed that the high school track was available for public use. Not sure what the policy was for strollers, as it was not explicitly posted, I contacted Andy Popper, whose name I found on the CVUSD website as the Athletics Director. I explained that I was a new mom to Castro Valley with a weak ankle looking to exercise safely and asked Andy if I may have permission to use a stroller on the CVHS track. Mr. Popper kindly replied that I would be welcomed to do so and to enjoy my work out. Given that Castro Valley has so few sidewalks and every time I go out with the stroller I am risking someone hitting me because they are not paying attention, this was quite the heaven sent and made me feel a part of the community immediately. As a result, I always make a point in supporting any effort by the CVHS Athletics Booster, whether it be buying meat in front of CVHS, participating in the races to benefit CVHS Athletics, or just donating money.

I regularly use the track and see other moms do the same, but recently heard from a few other moms I know from Castro Valley Mothers Club where I am an active steering committee member that they were not so nicely kicked off the track. They told me that they were asked to leave immediately and not given good reasons. Hearing of this I wrote Mr. Andy Popper again recently to make sure that using the track in such a manner was OK, and was given the attached short email reply confirming again that it would be fine and to enjoy my workout. I went to the track again on Saturday with my 8 month old daughter and it was then I was ejected from the track by a very stern and somewhat rude Al Palacio who told me all wheeled vehicles are banned from the track and I must leave immediately. I informed him that I had obtained permission from Andy Popper and he shook his head and told me that he doesnâ€™t care and that his authority comes from Castro Valley Unified School District. He said that due to some accidents that have happened strollers are not allowed. This does not make sense to me as your posted sign clearly states â€œUse field and facility at your own risk,â€ which I interpret that any accident or injury on the field does not hold CVHS or CVUSD liable.

The reason I am writing this letter is to inform you that your sign posted (see figure 1 below.) is not explicit about not allowing all wheeled things, like strollers and wheelchairs from the track. While is does mention no use of bikes or skates, it is not inclusive of all things with wheels, especially unmotorized strollers and wheelchairs which do not travel at the same speeds. 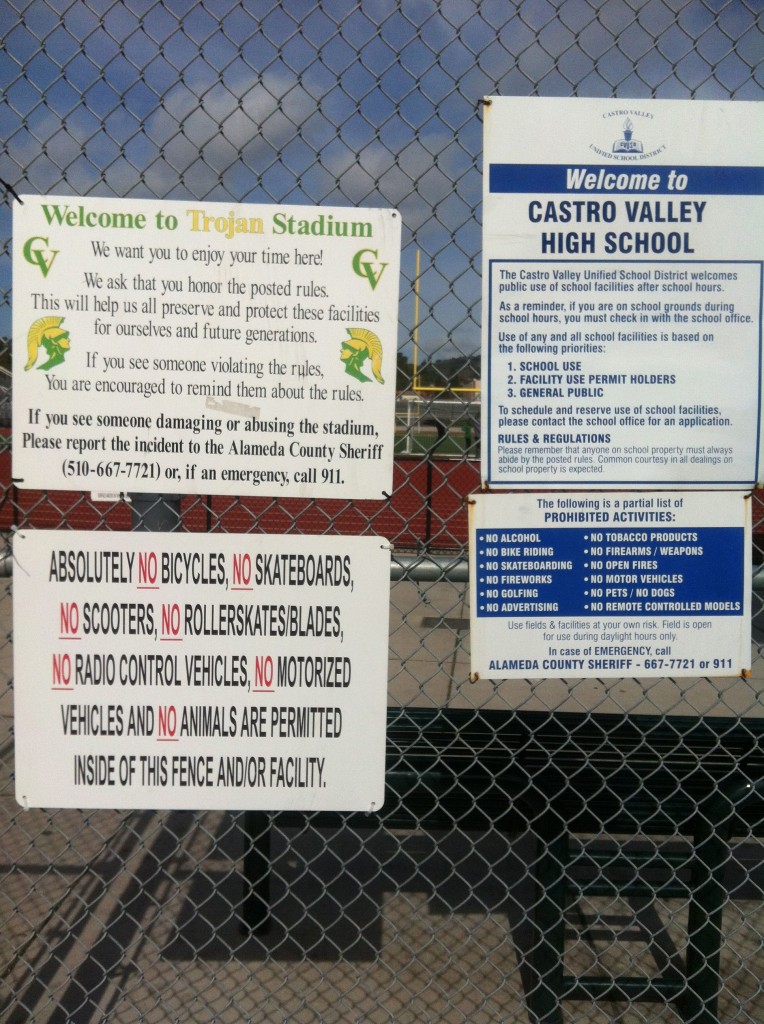 I know that I am not the only mom in Castro Valley who is confused by this sign. Is it possible to perhaps use the stroller during certain non-peak hours? I had specifically also asked Andy Popper and he had mentioned that as long as it is not during school hours or if there is a game going on that it would be permissible, but perhaps your no stroller policy is so new that the Athletic Director is also unaware? I respectfully request and appreciate an explanation of the policy in writing, as I am also unable to find such information on the CVUSD website. I would also be happy to help publicize your policy to all the mothers in Castro Valley Mothers Club as there are a good group of us who exercise and use strollers with little ones.

I called the Castro Valley Unified School District a week after I sent the letter. I didn’t hear back from anyone but I was not going to allow that to deter me! I called the Superintendent’s office and ended up speaking to the assistant to the Superintendent, who heard my story and promised to get back to me after another week. A week later, I didin’t hear back so I called again. This time, I was directed to speak with the assistant to the Assistant Superintendent of Business Services, who told me that she believes that strollers are indeed allowed on the CVHS track, and that the staff member who kicked me out must have been misinformed. She indicated that she will make sure that the policy is communicated and at my request she sent me a short email confirming that strollers are allowed. I forwarded the email to the other moms that I know who also use the track during off hours with strollers, in case they are ever asked to leave the premise while exercising again.

So glad that I will be able to continue my exercise at the high school track! I plan on participating in a 5K benefitting the CVHS Athletic Booster in June!