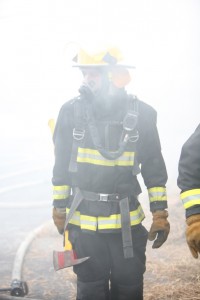 I want to teach my young children not to be scared of firefighters in mask with ax in hand.

Today was supposed to be a fun day at my son and daughter’s preschool. We had arranged for the Fire Department to come and visit and instead the kids did not have fun. The youngest among them were frustrated and disappointed. As a parent who was there to witness it all, it got me boiling mad. I wanted to teach my children about the helpers, the real life heroes that will be there for them in times of danger and need, even if I am not there. Sadly, this did not happen. I decided to write the letter below and I sent it to the Fremont Fire Department and Fremont’s Mayor. I may never get a response, but I believe it is worth trying anyway.

I am a new resident to the city of Fremont and a mother of two preschool age children who go to school at Empire Montessori Preschool in Fremont. Having been previously in Castro Valley, the Alameda County Fire Department often conducted annual presentations to kids at the preschools there, and I have always had a great impression of every fire fighter that I have ever met because they have always been very gracious with the kids, including my own, even when we just see them out on the street during the day. As an involved parent, I try to do my best to help the preschool, so when I heard from the Director about how she had previously tried to contact the Fire Department about doing a presentation for the kids only to be refused, I told her that I would look into this.

I am writing to express my disappointment with the brief visit that the preschoolers had by the Fire Department.

I initially contacted Irene de Jong, who is the business manager at the Fremont Fire Department, back in the middle of July. She informed me that the Fremont Fire Department does indeed do presentations for young children, and that I should contact Pamela Franklin, who was then on vacation. After waiting for Pamela to return from vacation, I contact Pamela, and then waited a few more weeks before she got back to me. We were informed that the Fire Department is extremely busy, and usually don’t do presentations for children under age of 5. However, I was later informed by the preschool director that a presentation was scheduled and we were all very excited about the visit for Thursday August 15. After hearing about the Fire Department visit, some other parents actually arranged their children’s schedule so that their kids can benefit from this presentation.

Now I feel as if I did the teachers as well as all the younger kids a huge disservice as the fire department arrived only to disappoint them.

When the scheduled time arrived, all the teachers brought the children out to the playground, which was next to the parking lot where the Fire Truck was parked. However, the fire fighters informed the director at that time that there would only be 30 minutes available, and they would not present to the younger children who were also out waiting. Worse, the younger kids also did not get to receive a plastic fire fighter helmet or even a sticker. The kids 3 and younger were brought out, not able to play at the playground, and told to sit around only to be disappointed!!

I was completely flabbergasted — I have never seen such a weak presentation by a fire department. I know better than to approach the firefighters about this since they are doing what they are told. Even the fire department’s presentation to the children age 3 and older were far from complete — they didn’t dress in the full fire fighter outfit. I thought the whole point of a presentation is so that children can be familiar with not only fire safety but also be more familiar with what firefighters look like when they might encounter one during a fire. I most certainly did not understand why the presentation couldn’t be given to the younger children as well since they were all sitting out there anyway! When I talked with the teachers later on, they told me that not only were they disappointed, the children were very upset by the experience and it created more work for them. Instead of being happy, it literally ruined their day — Some refused to eat lunch, and some did not cooperate during nap time. and I imagine some parents will hear about it after the kids go home.

My previous experience with fire safety presentation in Castro Valley was so much better: Even though Redwood Forest Preschool was a bigger school and had children as young as 18 months, the Alameda  Fire Department did a thorough presentation which included full show and tell of fire fighting gear. They had one firefighter who would demonstrate what the tools did, one who dressed in full outfit to show what firefighters looked like with full suit and mask, and literally every one of the firefighter (3 as I recalled) had a job. None of the firefighters just stood around, as in the presentation today by the Fire Department. I mean, even if you can’t get full time fire fighters to do this kind of presentation, can’t volunteers be asked to do this?

I realize that instructing preschool children is low priority for the Fremont Fire Department, but I feel that the Fire Department should take pride in how they organize and present their fire safety presentations, ESPECIALLY to  young children who look up to them. This is the audience that would benefit the most from a good and thorough presentation, especially since there are quite a few actually afraid of fire fighters (I have come to discover).  How else are young children supposed to learn? Are individual parents supposed to bring the kids into a fire house? If you can’t count on fire departments to care about such things, who should? How else are children supposed to learn about those who Mr. Rogers call, “the helpers” when scary things happen?

P.S. I will also be sending a copy of this letter to our Congressman Eric Swalwell.

Thank you for contacting me to express your displeasure with your recent experiences involving our Department and the Empire Montessori Preschool. I was saddened to learn of your disappointment because our relationship with the community we serve is of paramount importance to us. Please be assured that we will look into this matter fully and immediately. To that end, I spoke to Deputy Chief Jim Martin who heads our Operations Division first thing this morning and tasked him with reviewing the matter. The Fremont Fire Department is committed to strong community partnerships and fire safety education and we take that role very serious. Please allow Chief Martin a few days to conduct his review and in the meantime, if you would like to speak with him directly please feel free to contact him at:

Again, thank you for taking the time to communicate with us.

Hopefully I will get more detailed information on Fremont Fire Department’s policies on children safety education.